WE CANNOT ANSWER PHONE CALLS DURING THE COVID-19 OUTBREAK

Based on regional regulations and social distancing requirements, we are unable to provide phone support at this time. However we are still working and you may contact us using this form. We will continue to support you through these forms of communication.

Have a look at the full range of genuine products and brands in our Men and Wrist Watches categories that you can safely buy online in United Arab Emirates (UAE) at discounted prices. 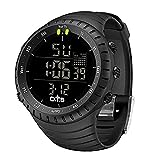